Despite its pretty morbid nature, one of the most famous sights of the Czech Republic is the Sedlec Ossuary, also known as the “Bone Church.” It’s a little church of which interior is made mostly of human bones. It’s also just a short train ride away from Prague.

There’s a fascinating town in the Czech Republic, about 70 km away from Prague. It’s called Kutná Hora. Its historic city center is on the list of the Unesco World Heritage sites, but the town holds something even more interesting.

There is the famous “Church of Bones” – the Sedlec Ossuary. I had always wanted to visit there, and when I suddenly had the opportunity I immediately took advantage and went to see it. It’s only an hours’ train journey away from Prague, and the train tickets aren’t expensive.

It’s also a great day trip to take from Prague because you can take a morning train and check the church and the historic city center during the day and be back in Prague to have a dinner or a bar hopping in the evening.

You can walk from the train station to the Sedlec Ossuary; it’s not more than 20-30 mins walk, and there are relatively good signs, so you cannot get lost. But if the weather is bad then I recommend taking a taxi.

The Sedlec Ossuary was just as macabre and beautiful in a sinister way than I had expected, only smaller than I had thought it to be. The whole interior of the church is made from human bones. The walls are covered with bones, and there are crescents, chalices, statues and maybe the most famous of the artifacts – a big chandelier. You can make almost anything out of human bones if you just know how to put them together. It takes a lot of imagination but the possibilities are truly endless.

The History of the Sedlec Ossuary of Kutná Hora

In the 1600s a huge number of people died from the plague and the cemeteries were filling rapidly. Despite the lack of burial grounds the bones of the deceased had to be gathered somewhere and they started piling the bones into this little church.

The bones are reconstructed into the artifacts that they’re representing now as late as in 1870, but you can still feel the plague infected history when you step into the church. The smell of mold, earth, and bones hang in the air all over the place. It’s so powerfully present that you just cannot but remember the old motto of the Middle Ages: “Memento Mori” (“Remember that you die”).

We happened to be at the Sedlec Ossuary at a time of day when there weren’t many other people on the site. This was a tremendous advantage because I could take much better photographs of the interior of the church and of the old and a bit creepy cemetery outside.

The bone church is so small that if there happen to be a couple of busloads of tourists inside, the place is so crowded that you’ll have difficulties to even see it thoroughly. So try to go early in the morning or late in the evening to avoid the worst of crowds.

You won’t need much time to see the bone church, though, because it’s small but reserve at least 2-3 hours for it. On the road to the church, there are a couple souvenir shops and at least back in 2009 they were selling some pretty sweet stuff: hand-painted skulls, etc. But I don’t know what it’s like today, have they turned out to sell the usual, kitschy stuff that most traditional souvenir shops tend to offer.

After checking the shops you can walk to the center of Kutná Hora to have a pint of some good, traditional Czech craft beer while watching the Unesco World Heritage –listed city center. If you want to grab something to eat I recommend wandering more off from the center square, to avoid the tourist prices and crap food. Further away I’m sure you can find some good and cheap local restaurants. 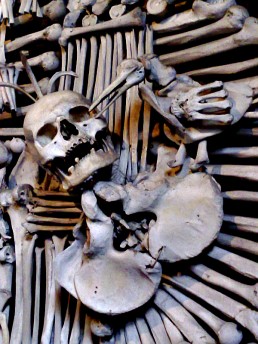 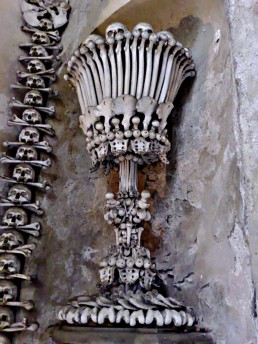 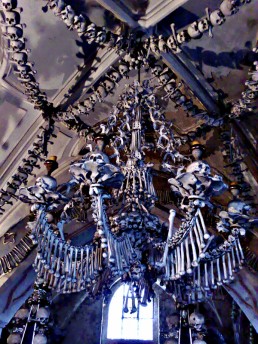 Bones at the Sedlec Ossuary. 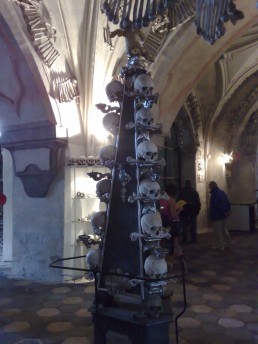 After you’ve taken a train back to Prague, you’ll still have time to go to see a classic Czech marionette show. There are centuries of tradition of Marionette Theather in the Czech Republic and that’s something not to miss out while you’re in the country!

It’s good to remember that these shows are mainly for adults, though. We stopped by to see the Marionette version of the opera “Don Giovanni” by W.A.Mozart in the National Marionette Theather. You can find the ticket prices, reservations, showtimes and everything else from their website.

The tickets can be a bit pricey but if you’ll show up at the theater just before the show is starting and it isn’t fully booked, you may have the tickets at half price. That’s what happened to us when we showed up about 5 mins before the start of the show. Of course, there’s always a chance that you can’t get in if it is sold out, but then you can try on another evening. There are many shows daily, and the theater is located in the very center of the city in Staré Město.

You can also buy wooden marionette puppets from many places in Prague but be prepared to pay a fair amount of money of these splendid creations of handicraft.

The best old Czech marionette puppet which I found. The Devil. 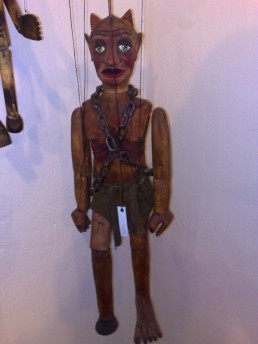 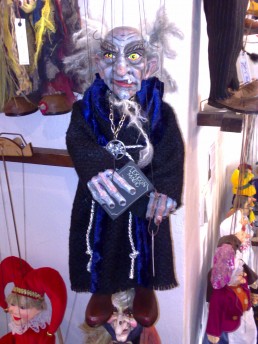 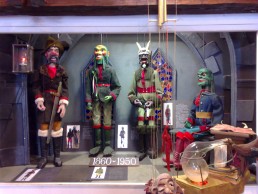 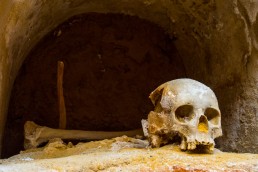 Dance with the dead in a medieval funeral crypt, feel the glory of the Roman Empire, and crown the day with a sweeping view from the castillo.