|In Travel, Asia, China
|By Piritta

I’ve often heard that the Forbidden City in Beijing is one of the scariest places in China. When I was there, I didn’t think so, but I still have some tingling memories of my visit.

The Forbidden City (Zijin Cheng, 紫禁城 in Chinese; literally “Purple Forbidden City”) has over 600 years of history of assassinations and plotting behind it, so no wonder that it’s also said to be occupied by several ghosts. When I was walking inside its tall and wide walls, I wasn’t familiar with this folklore – unfortunately. But if I ever go there again, I will look at the Forbidden City with entirely different eyes.

One of the most famous Forbidden City ghost stories tells about a weeping woman, dressed all in white. Another one is about flute music being heard during the dark hours of the night from the empty city. Or is it really empty?

Also, one especially intriguing story is about ghost dogs that have been seen running in the narrow corridors at the edges of the labyrinth that is the Forbidden City. Ghost stories about animals are always unusual and intriguing. I would’ve loved to see those dogs when I was there.

Unfortunately, I didn’t see any ghosts or ghostly apparitions during my visit. But what I did experience was a feeling of strange nervousness, like someone – or something – would’ve been watching me all the time. I felt a “presence” of a kind. My grandmother filled my imagination with ghost stories when I was a kid, so I didn’t really think so much about it then. Because of her, I’ve never been afraid of ghosts.

Back in those days I also only had a “point-and-shoot” film camera, no fancy DSLRs. But I managed to get something out of those grainy photos and did some tricks to a few of them shown here. Unfortunately, I didn’t find that one particular, strange photo where there was something odd in the frame that wasn’t there when I took the picture. If I ever find it, I promise to update it here! 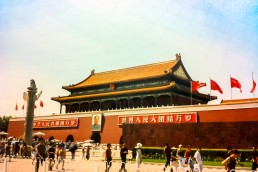 The Tianmen Gate to the Forbidden City, Beijing, China

Ghosts in the Chinese Tradition and Folklore

Ghosts are taken very seriously in the Chinese culture. According to the Chinese tradition, you should avoid ghosts at all cost. Superstition also lives wide and well in China. Even Confucius said: “Respect the ghosts and gods, but keep away from them.”

Maybe the most noticeable tradition is the two “gate-keepers” always standing on practically every doorstep. These two demons are guardians and their job is to keep evil spirits from entering through the door.

Also, all the doorways in Forbidden City have those high steps you have to carefully step over. I remember someone in our group asking about them and our guide told: “They are there because ghosts can’t jump and they’d be trapped inside the one room.”

A room inside the Forbidden City, Beijing, China

One Core Legend About the Forbidden City

The legend tells that the Forbidden City is cursed and has been since the day it was officially opened by its builder, the Ming Emperor Yongle in 1421. The “Evil Emperor” slaughtered over 2800 people in his harem when trying to suppress an alleged sex scandal in New Year’s Eve when the official opening ceremonies were held.

A few years after that horrendous incident a fire ravaged the Forbidden City, burning over 250 buildings to the ground and killing numerous people. Despite the place being covered with lucky charms, they didn’t prevent the destruction. The Emperor Yongle sank into depression thinking that it was a punishment for his actions and he died in 1424.

Thousands of people have perished inside the walls of the Forbidden City after that, so you’d think that the place is overpopulated by spirits. Maybe it is. Maybe it isn’t. I leave that for you to decide.

Most of the Forbidden City is also still off-limits to visitors; the majority of its 720,000 square meters area remains closed to the public. Why, exactly?

What we do know, is that it’s strictly prohibited to be inside the Forbidden City at night. They will always close the gates at 5 pm, sharp. That time is said to be the most mysterious and that many scary phenomena would appear. Doesn’t that arouse your imagination or what?!

Tell us about your experiences! Have you visited the Forbidden City and seen some ghosts?

Hi Piritta, I think what you’ve encountered inside the building is more chilling than what I’ve experienced. At least I can second-guess myself that the ‘cold breezes’ may simply be the changing of the weather. And yes I do agree that those walls have seen far too many murders and deaths, more than anyone can count, whether rightfully or not. I believe there are a lot of negative energies residing in those walls. It’s unfortunate that the government places too much restrictions in the Forbidden City. I would like to spend an night inside one of those chambers because this palace is so mysteriously intriguing.

Hi Piritta, I think what you encountered inside the building is far more chilling than what I’ve experienced. At least I can second-guess myself that the ‘ cold breezes’ may simply be the changing of the weather. And yes I do agree that those walls have seen too many murders and deaths, whether rightfully or not. I believe there are a lot of negative energies residing in those walls. It’s too bad that the Communist Government places too much restrictions in the Forbidden City. I would gladly spent an night inside one of those chambers because this palace is so mysteriously intriguing.

I’ve been to The Forbidden City but unfortunately did not see any ghosts, however, during my visit there I felt cold breezes rush pass me. But then again, I visited during an late Autumn morning so it may have been the weather.

Hi, Trevor. I remember a couple of slight, cold breezes, too. Though I experienced them inside some buildings, so it could not have been the wind.. So, you never know, it may or it may not have been the wind what you experienced, too. 😉 Those walls have seen so much during the centuries, so if ghosts etc. do exist, that sure is one place where they’d dwell. And there are people who wouldn’t spend the night in the Forbidden City for a billion dollars, so something is definitely there..

Great to know that you liked this piece! The Forbidden City is a fascinating place to visit, hopefully, you’ll have a chance to go there someday!