Navigate upstream the legendary Rio San Juan in the footsteps of pirates, venture into the untouched jungle and visit the ruins of the Spanish fortress of El Castillo. The San Juan River wriggles 192 kilometers from San Juan de Nicaragua at the Atlantic coast to Lake Nicaragua, hugging the border of Nicaragua and Costa Rica. Famed pirates and buccaneers, and later smugglers, used this channel to access “the jewel by the Sweet Sea”, the Spanish trading town of Granada.

Rio San Juan is one of the rare border rivers that belongs solely to one country. The strategic location has made the waters a conflict zone for centuries. Spanish and the pirates battled over the dominance since the 16th century, which was followed by numerous border disputes between Nicaragua and Costa Rica. Rio San Juan was supposed to serve as a canal from the Atlantic to the Pacific, but due to the political reasons, the canal was built in Panama instead.

If you would like to experience the old day charm of Rio San Juan and visit the untouched jungle, go there now! Pirates didn’t appreciate detours, but we do, so we added a couple of options to explore the surrounding jungles on top of seeing Rio San Juan from start to finish. Check out our itinerary for getting the best out of Rio San Juan in just 4 to 7 days! 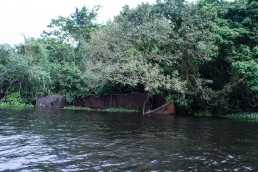 Graveyard behind the airport of San Juan de Nicaragua 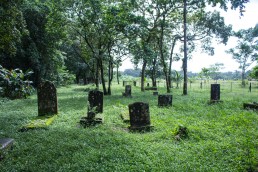 Spend at least 3 days exploring the area around the starting point of Rio San Juan. Start your journey from already remote San Juan de Nicaragua. This small jungle town is the gateway to the outermost jungle in Nicaragua: the vast Indio Maíz Biological Reserve, which is inhabited only by a small tribe of Rama Indians. For us, a trip to Indio Maíz offered a way more authentic jungle experience than the Amazon. We highly recommend 2-day Indio Maíz adventure with a real Indian homestay and a hike to the mysterious jungle pyramids of Canta Gallo!

The town of San Juan de Nicaragua isn’t very attractive, but the sights in the vicinity deserve at least one full day of your time before venturing into the Indio Maíz jungle. Tramble on the weird concrete walkways build upon marshland, visit the historical sights such as the four graveyards of the ancient Greytown, a rusty dredger that was supposed to construct a canal here before that of Panama, and a shipwreck belonging to the dredger, Vanderbilt’s Transit Company. A lbit longer boat trip (half-day to full day) showcases nearby lagoons with an opportunity to spot manatees and the raging shore of the Atlantic, the starting point of Rio San Juan River.

During your days in San Juan de Nicaragua, find a local Rama Indian guide to take you into the Indio Maíz Biological Reserve. Prepare to see crocodiles, alligators, a plethora of monkeys, exotic birds, and poisonous frogs. Spend some precious time with the Rama Indians and hike to the sacred Rama Indian jungle pyramids. Check out our tips for organizing a trip to Indio Maíz in a separate article.

Please confirm the boat timetable from your accommodation. We received this schedule from our kind reader in June 2017, but cannot guarantee that it stays up to date. Please inform us about any changes to help fellow travelers. 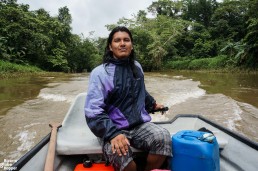 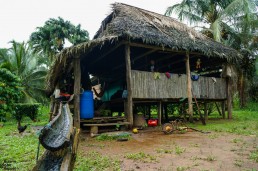 A traditional kitchen and a stove in a Rama house, Reserva Biológica Indio Maíz, Nicaragua 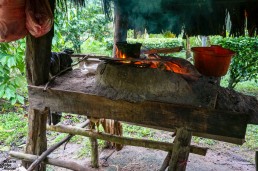 Our guide Salomon and some Rama children in Makenge, Indio Maíz, Nicaragua 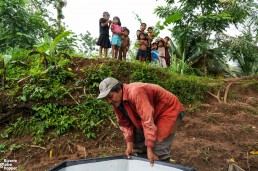 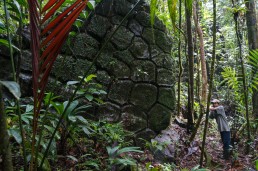 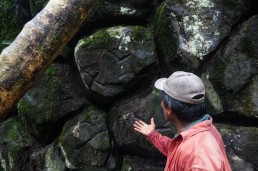 Depending on your schedule and how many nights you’ve already spent in the Indio Maíz jungle, you can either stay one to three nights in the picturesque river town of El Castillo or expand your jungle exploration by venturing down Rio Bartola.

The charming town of El Castillo overlooks the gruesome rapids of Rio San Juan, dubbed as Raudal del Diablo for a reason. In the 17th century, Spaniards built here a fortification in the hopes of protecting Granada from the pirates that struggled to cross the raging rapids. However, the fortress was attacked time and again.

Today, El Castillo is the most popular base for short Indio Maíz jungle trips down Rio Bartola tributary that borders the reserve in the west. El Castillo is a touristy little town with one main street, a bunch of tour operators, and the enchanting fortress ruins. Cobbled-stone alleys, colorful houses, and decent restaurants will keep you satisfied for a day or two. After a real jungle adventure, the small hotels of El Castillo with real beds and toilets feel like a sinful splurge!

The river boats that carry passengers through Rio San Juan, all the way from San Juan de Nicaragua to San Carlos 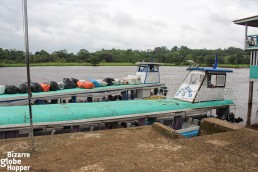 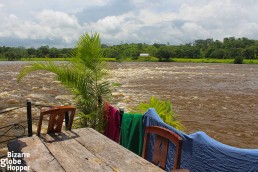 On the top of the Spanish fortress in El Castillo 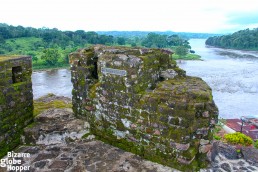 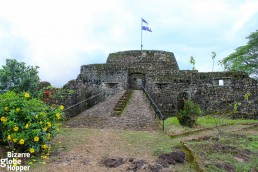 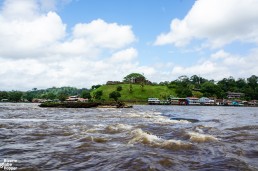 Town of El Castillo at the banks of Rio San Juan River, Nicaragua

If you already miss the jungle, book a trip to the Bartola Basecamp and hop off the San Juan de Nicaragua–San Carlos river boat already before El Castillo, at the Bartola junction. After 1,5 hours of paddling, you’ll be one happy camper (tents come with mattresses) on the other side of Indio Maíz, actually quite near Canta Gallo. We were enticed to visit the place but had only one night left, which would have made the trip too quick and cumbersome. You’ll need at least two nights for Rio Bartola if you must catch a boat to San Carlos the next morning. Many have asked us which one to choose, Indio Maíz or Rio Bartola. We picked Indio Maíz for the remoteness and the Rama Indians.

We also were tempted to load our batteries in Rio Bartola River Lodge, but after passing it on our journey upwards the river, we opted a more civilized habitat in El Castillo. If you’ve already been deep in the Indio Maíz, the surroundings of Rio Bartola River Lodge just don’t feel like a real jungle, as there are roads, real houses, and other people around. It’s not a luxurious place either, where you could chill out in the solitude.

It’s hard, and not recommendable, to resist the spell of El Castillo while approaching the tiny fortress town from the river. Relish in the small town charm for one day – it’s the another side of the pirate story, anyway!

Getting to El Castillo (or Bartola Basecamp)
Catch the earliest possible ferry from San Juan de Nicaragua to San Carlos. Hop off either in El Castillo or at the Bartola junction a little bit before El Castillo, if you’re heading to Bartola Basecamp. The fastest river boat cuts the distance in 4,5 hours. On the way, you’ll stop in the small river town of Boca de Sábalos and have great chances to spot huge crocodiles.

The Thread of “Nicaragua Canal” Project

During the last couple of years, the old plans of dredging a canal through Rio San Juan were revived creating massive ecological concerns. Luckily, according to the current plans, Rio San Juan would remain untouched, and the possible Canal de Nicaragua will be built further to the north, from Punta Gorda River on the Atlantic to Brito River on the Pacific side. We certainly hope that the project will never be accomplished, as it would endanger biodiversity of these precious lands and the fresh water lake of Lago Nicaragua. The disputed canal project is led by a Chinese billionaire whose wealth suddenly crashed in the stock market, so the plans might even be canceled, though Nicaraguan government has already approved the construction of the canal.

San Carlos is a busy but small port town on the mouth of Lake Nicaragua. It’s not blessed with urban beauty, but well worth exploring at least for an afternoon.

Walk around the buzzing waterfront boulevard (malecón) stopping for a coffee or ice-cream and climb to the small Spanish fort to enjoy the best views to the Lake Nicaragua. Entrance to Fortaleza de San Carlos is free, and Restaurant Mirador in its inner yard is a pleasant place to down a beer or two. There are even cannons!

Getting to San Carlos (or Ometepe Island through San Carlos)
On your final day in El Castillo, catch a ferry to San Carlos (1,5 hours). If you would like to travel forward on the same day, take an early morning ferry from El Castillo to San Carlos. At least walk around in the harbor area before catching a flight to Managua or Ometepe. From San Carlos, you can even take a bus all the way to Managua, though flying is the most pleasant option. We took a night ferry to Ometepe (14PM–0AM), enjoying a perfect sunset over Lake Nicaragua but suffering from the sea sickness due to ripple around the midnight. It’s a huge lake!

The majority of tourists only venture from San Carlos to El Castillo, covering solely one-third of the San Juan River. Of course, that’s better than nothing, but please consider sacrificing a couple of days more to reach the real jungle around San Juan de Nicaragua. Cruising upstream Rio San Juan, together with visiting Indio Maíz Biological Reserve, was the climax of our 4-week Nicaraguan adventure.

Have you sailed down Rio San Juan – or visited El Castillo, San Juan de Nicaragua, or Indio Maíz? Share your experiences from Rio San Juan in the comments below! 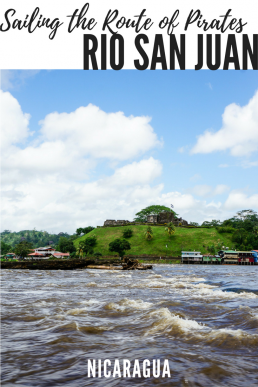 How to Organize a Trip to Indio Maíz Jungle, Nicaragua

Venture deep into Indio Maíz jungle with Rama Indians, stay in the traditional Rama home, and hike to the sacred pyramids of Canta Gallo. 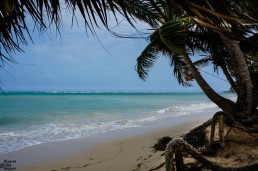 Highlights Of Nicaragua In 4 weeks: The Ultimate Itinerary

Explore the smoky volcanoes, pristine beaches, and unexplored jungles of Nicaragua in just one month. 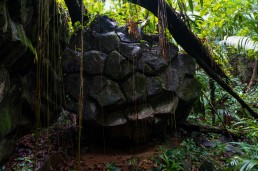 Some call it a lost city of ancient Indians, the others claim the pyramids are millions of years old. We traveled deep in the jungle with Rama Indians to hear some unbelievable stories and spot poisonous animals while exploring these stunning grounds. 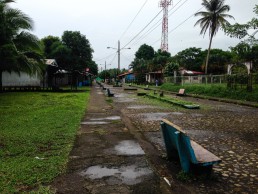 San Juan de Nicaragua a.k.a Greytown – A Gateway To Indio-Maíz