Where To See Orangutans in Borneo: The Best Places For Wild Orangutans And Sanctuary Visits

|In Travel, Asia, Malaysia
|By Niina

It’s easy to see orangutans in sanctuaries around Borneo, but you need a little more planning and luck to find wild orangutans. Check our list of the best places to see orangutans in Malaysian Borneo! Each of these orangutan destinations has its pros and cons regarding logistics, lodging and, of course, the scale of wilderness and ease of spotting the wildlife.

Summary: The Best Places to Stay to See Bornean Orangutans

Best Places to See Orangutans in the Wild

The Best Orangutans Sightings in Borneo

Sungai Kinabatangan aka Kinabatangan River offers the easiest and most frequent sightings of wild orangutans. Kinabatangan is the second longest river in Malaysia, expanding 560 kilometers from the mountains of Sabah to the Sulu Sea. Kinabatangan’s northern banks have some of the highest concentrations of wildlife in Southeast Asia.

Our Orangutan Experience in Kinabatangan River

During just one day, we spotted six wild orangutans in Kinabatangan. For us, the up-and-close orangutan sightings on Kinabatangan were the best we had in Borneo.

But orangutans are just a part of the spell here. Mornings start with a cruise when mist wraps the jungle in the fairytale-like gown and the sounds of jungle promise exciting discoveries. We loved observing packs of wild proboscis monkeys, built a love-hate relationship with the mischievous macaques, laughed at the wild pigs who charged us during our jungle hike, and visited the seventh heaven for spotting the rare pygmy elephants on the water’s edge amidst thick vegetation.

Check out these amazing itineraries in Sabah and start planning your trip!

Getting to Kinabatangan River

Fly, drive, or take a bus to the city of Sandakan. All Kinabatangan tours start from there and include return transport. Booking a guided tour to Kinabatangan is your best bet, as most lodges are owned by tour companies. It’s possible to drive to Sukau independently, but we would rather recommend boat travel from Sandakan to Sukau, as that way you’ll see more – and have a chance to see orangutans also during the transfer!

Pros and Cons of Kinabatangan River as Orangutan Destination 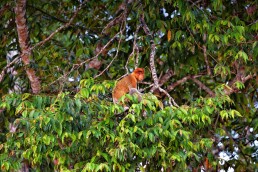 Orangutan spotting hardly gets better than in Kinabatangan River, where you can also see proboscis monkeys!

Danum Valley is the wildest place on earth where you can spot Bornean orangutans. By wildest I mean the real, virtually untouched wilderness. Danum Valley Conservation Area is the last stronghold of primary rainforest in Borneo and the largest area of undisturbed lowland dipterocarp forest in Sabah. Here the trees are 70 meters tall and wildlife you encounter spend the majority of their time further in the heart of the protected primary forest, where no modern man has stepped.

Seeing wild orangutans in Danum Valley is an exclusive, once-in-a-lifetime experience. There’s only one hotel, the award-winning Borneo Rainforest Lodge with just 30 luxurious chalets. It’s a paradise for naturalists, birders, and nature photographers. You will live inside the vast home of orangutans and other wildlife: Borneo Rainforest Lodge is Borneo’s only hotel, which lies inside the primary forest. Orangutans had slept right upon our chalet the night before we arrived!

How to Get to Danum Valley

Fly in Lahad Datu from Kota Kinabalu (one hour). The adventure begins with a complimentary 2-hour jeep transfer inside Danum Valley Conservation Area: we managed to see a herd of the rare Bornean pygmy elephants during both drives!

Pros and Cons of Danum Valley as Orangutan Destination 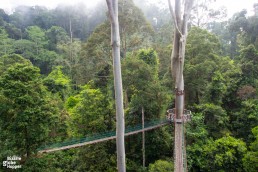 Much like Danum Valley, Tabin Wildlife Reserve offers exclusive encounters with wildlife in their natural habitat. In the lowland dipterocarp forest and mangroves of Tabin hide seven of Sabah’s eight primal species, among them orangutans in relatively low numbers. However, Sepilok Rehabilitation Center translocates rescued orangutans in Tabin, which makes orangutan spotting a lot easier.

How to Get to Tabin Wildlife Reserve

Pros and Cons of Tabin Wildlife Reserve As Orangutan Destination

Batang Ai National Park is the best place in Sarawak to spot wild orangutans – it’s also practically the only place. Batang Ai belongs to the Borneo’s largest – and first – tropical forest transboundary biodiversity conservation area. It’s claimed as the most important orangutan sanctuary in Borneo: up to 10% of Borneo’s wild orangutan population calls these staggering 1.1 million hectares of land their home.

How to Get to Batang Ai National Park

Most tourists book their visit through a tour company when transfers are included in the package. Batang Ai is around 275 km and a 5-hour drive from Kuching. The park is centered around Sarawak’s largest man-made lake and entrance requires taking a motored longboat from either Aiman Batang Ai hotel’s jetty or the public jetty (no public boats available, so prebook the transfer). The boat trip takes around 2 hours.

Pros and Cons of Batang Ai For Orangutan Holiday 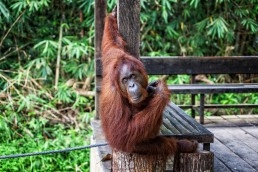 The southern part of Borneo, called Kalimantan, belongs to Indonesia. Tanjung Puting National Park in the Central Kalimantan is the best destination in Indonesia to meet rehabilitated orangutans in the wild. The national park is explored traditional, two-story klotok boats, which stop at orangutan feeding stations.

Getting to Tanjung Puting is a bit trickier compared to above-listed orangutan destinations in Malaysian Borneo. Fly from Jakarta to Palangkun and book a tour including riverboat transfers: a boat is the only way to access Tanjung Puting.

You can also visit word-famous orangutan sanctuaries in Sabah and Sarawak to meet semi-wild and rescued orangutans. We visited – and loved – both Sepilok’s Orangutan Rehabilitation Centre and Semenggoh Nature Reserve in Sarawak. Both facilities offer almost guaranteed chance to see orangutans during their feeding times.

I highly recommend adding at least one orangutan sanctuary into your Bornean itinerary, as it doubles your chances to see the great apes and gives back to orangutan conservation. Although the orangutans are not exactly wild, it’s still an impressive sight to witness them swinging along rainforest canopy towards the feeding platforms.

2-Week Borneo Itinerary to Maximize Orangutan Encounters
Get inspired by our 2-week route in Borneo, which can be easily be adjusted into 1-week or 3-4 weeks itinerary. Our route covers Kinabatangan River, Danum Valley, and the orangutan sanctuaries of Sepilok and Semenggoh – with some other exciting attractions. Check it here and start planning your orangutan holiday in Borneo! 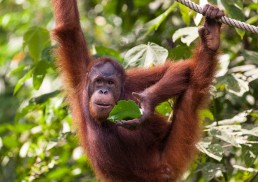 Feel free to visit Borneo’s orangutan sanctuaries around the year, as orangutans are likely to pop at the feeding platforms unless torrential rain keeps them in the forest canopy. The dry season runs from March to October, which is considered the best time to visit Borneo; it’s also the best time to see orangutans in the wild. Still, please note that it might rain anytime, as you’re in a tropical rainforest. Orangutan sanctuaries get crowded during school holidays, so it would be best to avoid those timings if you can.

Please, never ever support “a self-claimed orangutan sanctuary” where orangutans are kept in small cages or leashes, required to do tricks, or where these great apes look stressed, mistreated or unhappy! Also, never touch, feed, or play with an orangutan (unless you’re volunteering and liable to do so). 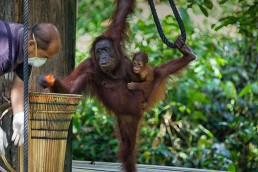 How to Behave Near Wild Orangutans

Orangutan observation has its own guidelines, but using common sense brings you far. We listed below the common rules of visiting orangutans, but please listen to your guide’s instructions in all situations.

Why Borneo’s Orangutan Population Has Dropped 50%

A recent study recorded a saddening 50% decline in Borneo’s orangutan population. During just 16 years between 1999 and 2015, we’ve lost roughly 150 000 individuals. The greatest surprise for us was that up to 70% of the loss might be caused by hunting and other killings by farmers. Habitation loss by palm, paper, logging, and mining industries is only a part of this tremendous tragedy, though the most severe losses were recorded in the areas where habitat was destructed.

We as consumers can help to save their habitat by choosing products, which don’t use palm oil. If you’d like to donate to orangutan rehabilitation and conservation, The Orangutan Project (EU/AUS) and Orangutan Appeal (UK) are both solid options; the latter funds projects at Sepilok’s Orangutan Rehabilitation Centre. 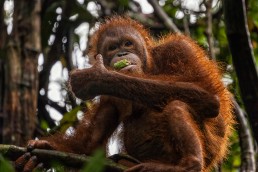 An orangutan munching a leaf in rainforest of Sabah, Borneo

Facts About Orangutans in Borneo

If you have you seen wild orangutans in Borneo, please share your experiences in the comments below! 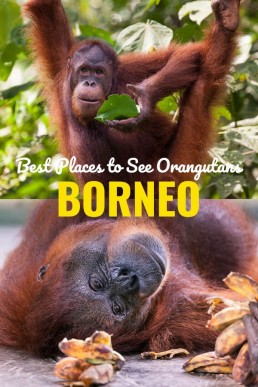 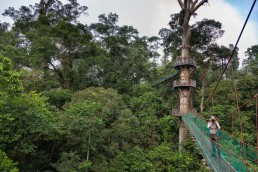 Danum Valley offers the most authentic wildlife encounters in Borneo, and it's the best place to see the rare pygmy elephants. Famous canopy walkway gives a bird-eye view to the most complex ecosystem in the world: the primary rainforest, the home of truly wild orangutans. 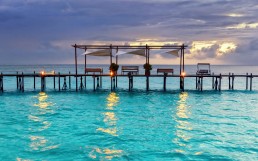 Where to Stay in Borneo: Best Rainforest Lodges, Beach Resorts, and City Hotels in Malaysian Borneo

Explore the rainforests of Borneo, swim with turtles on a paradise island, spot orangutans in their natural habitat and stay in luxurious lodges, away from the crowds. 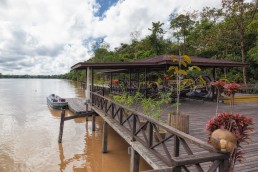 Kinabatangan River Cruise in Malaysian Borneo: Everything You Need to Know

Take a boat ride to the Kinabatangan River in Borneo and keep an eye out for the Bornean Pygmy Elephants and Proboscis monkeys.