The biggest festival of the year in Puno – Virgen de la Candelaria is at the beginning of February. It’s the time when dance performances, devils, and other strange creatures conquer the streets, accompanied by the music around the clock. It’s celebration time on the shores of Lake Titicaca.

The Biggest Festival of the Year – Virgen de la Candelaria

Puno isn’t particularly a beautiful town. Most of it is pretty ugly with its unfinished concrete buildings spotting the city scenery. In addition to this, it didn’t feel like the safest city I’ve been in though not the least safe, either.

What struck as a bit odd, though, was that outside of the main tourist street – Jr.Lima – there were mostly only locals hanging out on their business. And if you wandered further away, most of the time you were the only tourist around. This was actually quite fun but on the other hand a bit surprising, too. One day we went shopping at the local mall and big grocery store just a few blocks away from the main tourist area, and we saw only one other westerner on that whole shopping trip. This made us a bit more observant about our surroundings as we usually are (but not too much, though).

We happened to be in Puno at the beginning of February, and this is the time of the year when locals celebrate the biggest annual festival and celebrations in Peru: Virgen de la Candelaria. The majority of the tourists in Puno at this time have come mainly to see these parties but for us, it was just a nice coincidence. We had come because of the Lake Titicaca.

During this festival time – which lasts about few weeks altogether or sometimes even longer – there are lots of parades in the center as well as dancing and music performances all around the town. We were there during the highest period of the festivities, and there were performances about 24 hours in a day. On the other hand, this was quite fun because something was happening somewhere all the time. But then again, you couldn’t get much sleep during the nights because the music was thunderous almost the whole nights through. Our hotel was at the center of Puno, and the music was very audible in our room also at night. I was triumphal that I had my good earplugs with me! But some of the noise was audible even through the earplugs, but with those in my ears, I got at least some sleep. 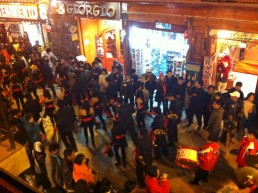 Parades of the Virgen de la Candelaria in Puno, Peru.

La Parada del Diablo – The Parade of the Devil

There are many parades included in the festivities, and there can even be several in a one days’ time. We saw one of the biggest parades on our last day in Puno. It was “the parade of the Devil” (La Paráda del Diablo). In this parade, the participants had the best masks and costumes with lots of Devils represented – as the name suggests!

Luckily we happened to be on the second floor of a restaurant during the best time of the show and were able to shoot the video from their window. If we’d be somewhere else, we couldn’t have seen as much. There were so many people watching the parade that the streets were totally clogged, and the noise was overpowering. During this kind of festivals, there is also always a greater risk of being mugged. Most of the locals were really drunk, and the crowd makes it easier for thieves to operate. So keep a closer eye on your valuables.

The Best Restaurants of Puno

The restaurant world of Puno didn’t offer many surprises. But there are a couple of good ones in the town which I can recommend. The first is called “Colors”, and it’s on Jr. Lima. We tested the place during the lunchtime offer. With 25 Soles (!) you got a salad, main course, and a drink. That’s a good deal. I got a (big!) Greek salad, Kashmir curry with chicken and an Inka Cola. And everything tasted great!

The second place was called “Mojsa” at the edge of Plaza de Armas. This restaurant had the 1st place in TripAdvisor during that time, so we just had to test it. The food turned out to be very similar quality, but I would’ve wanted more flavors in it.

The Jr. Lima street is full of restaurants but in the signs of unfortunately many of them, it’s said something like “Tourist Menu.” What could be more repellent than that? We didn’t go in any of them. A bit regrettably we didn’t try Cuy (guinea pig) either. Cuy portions are usually a bit pricey but here in Puno they were cheaper than anywhere else we saw. So if you’ll want to try it, try here. 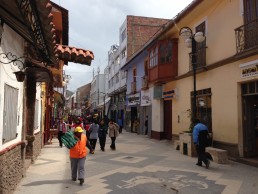 What comes to souvenirs in general, they are also much cheaper in Puno than for example in Cusco. Among other minor things, we bought three pairs of really soft and warm Alpaca slippers. Though just afterward we got to think about that hopefully the fur had come from already dead animals and not from animals slaughtered and raised because of their fur! In summary, Puno is an ugly looking town on the shores of Lake Titicaca, and if you don’t happen to be there during the Virgen de la Candelaria -festival, there’s not much to see.

The islands of the Lake Titicaca are the sights to see around here. But do venture further away from the most crowded tourist area of the center of Puno. Even though it’s not beautiful, you can experience some authentic, local day-to-day life going on around you without many other tourists in sight. Maybe you’ll also see a glimpse of another kind of Puno, which is more beautiful. Who knows? 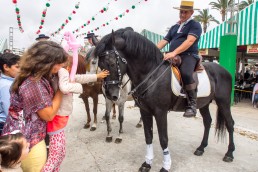 The vibrant mix of Andalucian horses, flamenco dresses, and Sevillan dance called "sevillanas" dominates the cityscape of Torrevieja for several days in May. 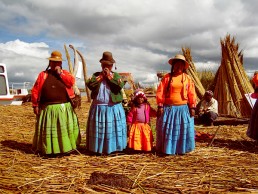 On the Floating Uros Islands of the Lake Titicaca

The peculiar floating islands made out of reed on the Lake Titicaca in Peru are a unique place to see. 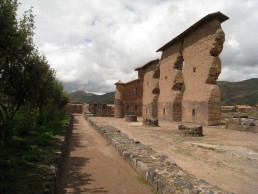 You can see many Inca ruins and little town while traveling via the Wiracocha Pan Andino highway from Cusco to Puno.