|In Travel, Estonia
|By Piritta

The abandoned Patarei sea fortress and prison (Patarei Vangla), a place of empty hallways and dark cellblocks. This fortress has an impressive history. It was completed in 1840 and was originally a military fortress, but it last served as a prison which had a pretty notorious reputation.

The place still looks quite like it was left when the prison was shut down. It was just left to slowly rotten away. Patarei have been a Culture Park since 2007, but it seems like they’ve just recently started doing some slow renovations on the place. If you like abandoned, eerie places with some haunted feelings, you’ll love this place. It’s also a photographers’ dream location if you like some urban exploration photography.

You can take a tram number 1 or 2 to Patarei from the center of Tallinn, or you can just walk by the “Culture Kilometer”. It’s only about 20 minutes walk from the harbor. The best thing about this place is that you can explore around entirely independently! You should also go as early as possible to avoid any potential crowds. It opens at 12 AM. Most of the times there won’t be any crowds unless you’re unlucky and happen to be there at the same time with some occasional tour group. Admission is only 3 euros/pp.

If you want, you can hire a guide. But they’re doing guided tours only for bigger groups at the time of writing this (10 people being the minimum). Either way, you’ll get more of an experience out of it, if you’ll just read a little bit of the history of the place, as well as from the legends and stories that are told about it and just go by yourself. Of course, you can ask tips from someone of the staff around if you’ll meet some. If you also happen to have a good flashlight, take it with you. You’ll need it if you want to explore the darker passageways inside. 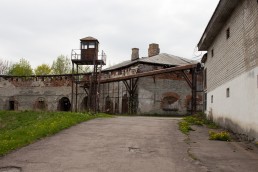 Places to See in Patarei Prison

The place itself is full of different kinds of cells, empty ones and ones with some furniture inside – rusted beds, tables, washing basins. There are halls with old movie chairs or rusted and broken typewriters. There is a library with dusted books still on the bookshelves. There are letters that the prisoners have written, still hanging on the walls of some cells.

There are also the prison guards’ quarters and the famous haunted places. This place has three storeys altogether, so it’s quite huge. It varies a lot what parts of the prison are open to the public to explore around. Sections which were open last week can be closed down on the next. If you visit more than once, you will probably get a different kind of tour each time. 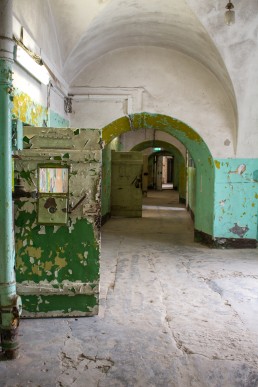 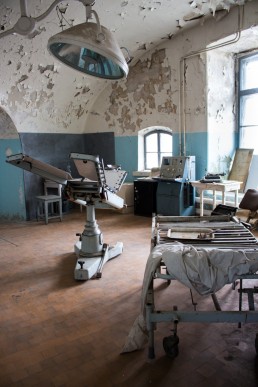 The Most Haunted Places of Patarei Prison

The story goes that Patarei prison is haunted. So much suffering have happened inside its walls that it wouldn’t be a surprise if something has left behind.

One of the most haunted places in the whole prison is the old operation/surgery room. Or actually, there are two separate operation rooms. In both rooms there are the big, surgery operation lights still on the ceiling and in the other room, there’s a very strange looking operating table standing there, eerily alone.

There are also other equipment, odd looking machines with rusted meters, and broken tubes hanging loosely. Rotten bodies of iron beds, some of them with straps of bloody linen still on them. Many ghost stories are told about these rooms, and when standing over there alone, even in daylight, you can feel the very strange feeling hanging in the air. Like the time was standing still, or someone would be watching your every move. Even I would think twice about going there at night, in the dark – even though I’d love some good, old ghost hunting from time to time. I’m sure that from here you could get lots of haunting material if you’d dare to come at night.

On the bottom floor, there is also a chamber which is definitely haunted. A short, but narrow and dark passage leads to the tiny room with an arched ceiling, and there was a candle burning on the side of the passages’ entrance. Nothing eerie yet, this place is full of rooms like this. But – when you step over the threshold, you will feel a change in the air, and you can feel that “something” is definitely there.

You may get chillies over your spine, and you will even feel some occasional, but very real cold spots in the room, appearing all of a sudden. This is all classic ghost stuff. You will also feel the urge to leave the chamber as soon as possible. Like there would be something sinister, something that doesn’t want you there. It’s difficult to explain, just go and see for yourself.

And last but not least, there is the execution room. It looks like a cellar, and there’s a drain in the floor. It was used for the last time as late as in 1991. This room is perhaps the most shuddering of all. The air feels suffocating and after stepping in you will just want to leave very quickly. So many lives have ended here that you can only imagine what kind of energies have left in this tiny, airless room.

Old letters of prisoners still on the walls. 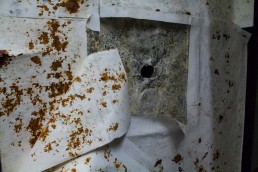 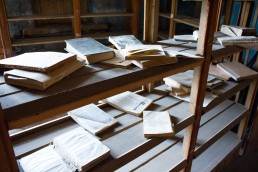 This place is a dead end. Patarei prison, Estonia. 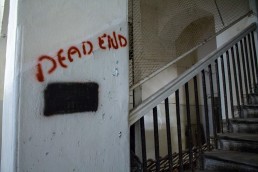 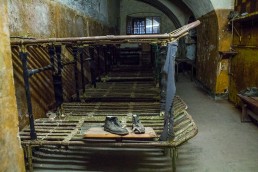 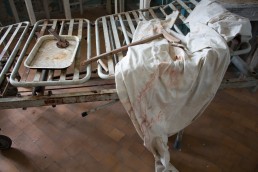 Some rooms are full of strange, old stuff left behind in Patarei prison, Estonia. 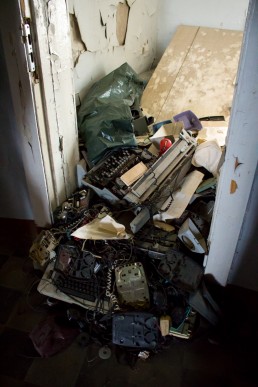 Walking grounds of the prisoners in Patarei prison, Estonia. 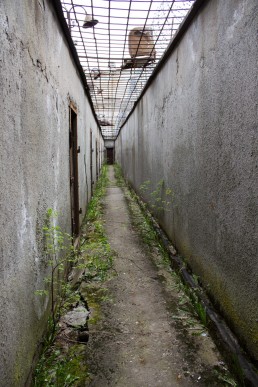 This place is full of photo opportunities, for a photographer of any level. The lighting conditions can be challenging, though. But if you just don’t take the task too seriously you will get a lot of great frames. Just don’t forget to concentrate on the place itself, to the feeling it has inside its walls and to the stories that it wants to tell. Then, raise your lens and push the shutter. Afterwards, you can relax and grab a cold beer in the little bar located in the backyard of the prison – if it’s open – and watch the sea while you sip your drink.

In summary, you should not miss the Patarei prison and sea fortress when you’re visiting in Tallinn, Estonia because it’s easily one of the best sights in Tallinn!

Strange equipment in the surgery room in Patarei prison, Estonia. 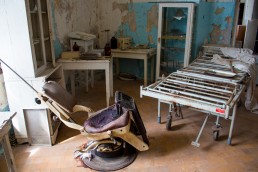 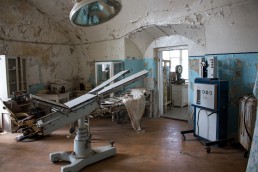 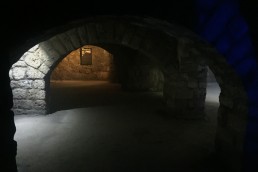 Under the Castle Hill in Budapest lies a labyrinth, over six miles long. These caves have a colorful history, including Vlad Tepes, the paragon of Dracula. 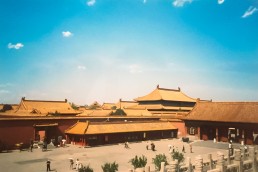