|In Travel, Japan, Asia
|By Piritta

Koyasan on Mount Koya is one of Japan’s most sacred sights and a place to have a pause. The Buddhist and almost overly tranquil atmosphere demand you to stop, breathe deep, and listen to yourself. It’s a place for meditation, but also a great place to be active with excellent sights to discover.

Koyasan celebrated its 1200th anniversary in 2015 and gained a lot of attention. And thanks to Japan’s recent hype and rise on numerous traveler’s bucket lists now in 2018, Koyasan is also receiving even more visitors.

Koyasan is a small town in the Wakayama Prefecture, but it has a lot to offer for travelers. You can spend the night in a temple lodging inside a Buddhist temple, see a distinct fire ceremony, and walk among centuries-old gravestones covered in moss in the cemetery of Oku-no-in.

And all this while feeling the strange peacefulness hanging in the air all the time.

Koyasan is an active monastic center of esoteric Buddhism, founded by a monk called Kōbō-Daishi (Kūkai) some 1200 years ago. From 2004 it has also been a UNESCO World Heritage Site. It’s located in the Wakayama Prefecture, south of Osaka.

This little village at the top of Mount Koya is a welcoming place, and we had a warm feeling from the moment we arrived. Also, many Japanese people visit Koyasan every year. Why they come here, is one of the legends that Koyasan has.

The pilgrimages visit the mausoleum of Kōbō-Daishi (Kobo Daishi), where the embalmed body of this fabled monk is said to be only in eternal meditation, not dead. And if you ask his body for salvation, you will have it.

Wheather this legend is true or not, there’s definitely something mystical in Koyasan. Maybe it’s the atmosphere of tranquility and peace all around. Or perhaps it’s the smiles of the monks walking past you, who somehow reflect a strange, and marvelous inner peace in their presence. 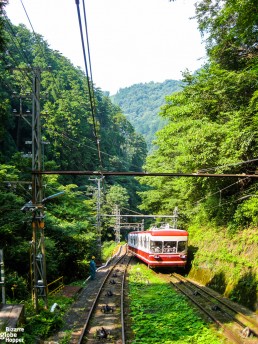 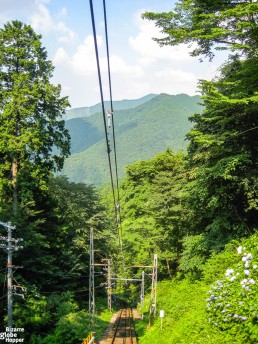 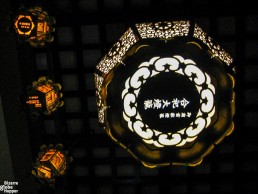 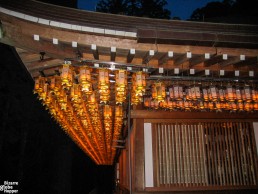 The Oku-no-in is the old graveyard in the middle of a thick cedar forest (or ”the inner yard”). You can take a short, 10-minute bus ride from the center of Koyasan to the bus stop of Okunoin-mae. The bus stop is called Senjuinbashi.

When you enter the Oku-no-in, you will see moss covered, crooked tombstones all over each other and narrow paths leading directly to the thick, dark forest. It will make you feel like you just stepped through a time portal into Feudal Japan.

Walk through the Oku-no-in to the Todoro Hall (Hall of Lamps). There are more than 10000 lanterns, which are eternally lit and the sight is just mesmerizing. It felt like the time stood still.

Behind the Todoro Hall, about 1 km away from the bus stop, stands the famous mausoleum of Kōbō-Daishi (Gobyo). The story goes that if you ask him for salvation, you shall have it. Thousands of Japanese come here every year for that. And you’ve also come this far, so why not?

But whatever you do, don’t miss a walk in the Oku-no-in at night! When the darkness descends, it’s a whole another world. The only, eerily dim lights come from the old stone lanterns here and there.

The shadows dance in the specks of light and will make your imagination go overload. Even if you don’t believe in ghosts, here you will start believing. Or if you still don’t, at least you’ll begin to feeling odd and looking over your shoulder, just in case.

And if you like long, peaceful walks in the tranquility of graveyards, you will love to walk in Oku-no-in. It’s a cemetery like no other I’ve ever visited, a world of its own – literally speaking. 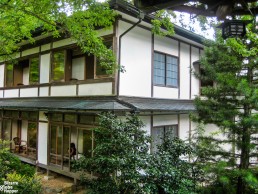 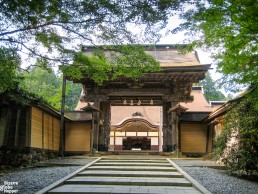 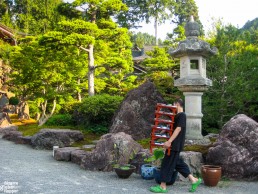 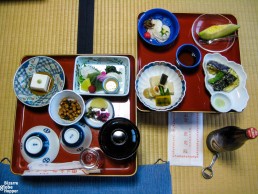 Have a Koyasan Temple Stay on Mount Koya

Around fifty temples in Mount Koya provide overnight stays accompanied with vegetarian food options. We had our Koyasan temple stay in the Eko-in temple for its proximity to Oku-no-in and a walking distance from the center of Koyasan. Eko-in temple is maybe the best temple to stay in Koyasan.

We got a traditional tatami room with a serene garden view and futon beds on the floor. It was ascetic, yes, but that’s how it’s supposed to be. We got settled, opened the paper doors into the Zen garden outside, sat on the wooden chairs, and drank a cup of green tea.

Let the time flow and feel the Zen, without giving any thoughts to the hassle of the outside world. You will do yourself a favor.

When our vegetarian dinner arrived, it included various suspicious items to me, as I am quite a picky eater. However, most of the items tasted good. And we got great Japanese beer to accompany our exotic dishes.

The monks have early mornings, which means they also retire early to bed in the evenings. If you have also signed to participate in the ceremonies the next morning, I suggest you do the same. With the pitch black darkness and profound silence already at about 10 p.m., you’ll have no problems with falling asleep.

Around 5 a.m. a monk came to pick us up to attend the morning ceremonies. Feeling still half asleep we walked behind him to the temple’s main hall, where rows of monks were already sitting and praying.

The hypnotic, Buddhist chanting went on and on for a time which back then felt like forever to me. But don’t get me wrong, it was fascinating because you’ll rarely have a chance to participate in something like that.

Nevertheless, it lasted maybe a bit too long to my liking, because I was also more eager to see the famous Fire Ceremony, which was scheduled to happen after the prayers.

So, the chanting stopped, and our monk guide escorted us into a much smaller and more intimate room, with only two monks performing the Fire Ceremony. My focus returned to 100% immediately.

The monks’ chanting and the rhythm of the drum held more variation, and the crackling of the dry wood under fire added its character to the moment.

I’ve always thought fire is fascinating and staring right into it here, in a Buddhist monastery at the holy Mount Koya in Japan, held some unique magic.

I still remember it today almost like it was yesterday, even though I’ve done updates to this post now in August 2018. It was unforgettable, and I’d like to go back someday. One of my top tips is not missing these experiences on your Koyasan temple stay. 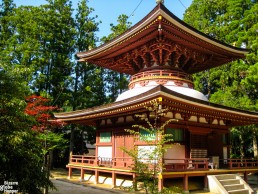 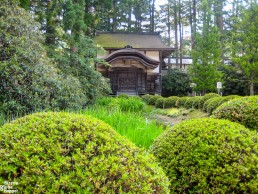 Wood carvings in a temple in Koyasan, Japan 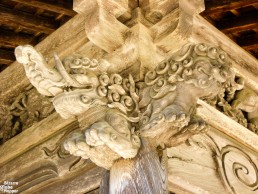 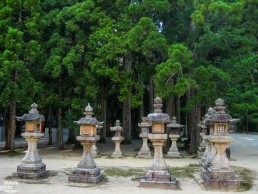 How to Get to Koyasan

First, get yourself to Osaka. From Osaka’s Namba or Shin-Imamiya stations take the Nankai Koya Line of Nankai Railways to the Gokurakubashi terminal station.

Some trains may require a transfer at Hashimoto Station along the way, so be sure to check this before you get on board. At Gokurakubashi hop on board the spectacular cable car, which will take you straight up the Mount Koya to Koyasan.

When you reach the Koyasan station, you will travel the last stretch by bus from the cable car station to the bus stop of Senjuinbashi at the center of Koyasan. Ticket fares may vary, so check the current fares, instructions, and updates.

There is also a Koyasan-World Heritage ticket available.

Koyasan may seem like a bit hard to get to, but it will be worth all the effort! And I promise you that you won’t get disappointed, especially if you’re looking for relaxation and a few Zen moments.

Have you visited this holy Mount Koya in Japan? How was it and what did you find and experienced in Koyasan?

The main street of Koyasan, Japan 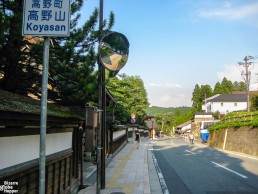 Zen garden around a house in Koyasan, Japan

Guardian of the temple in Koyasan, Japan 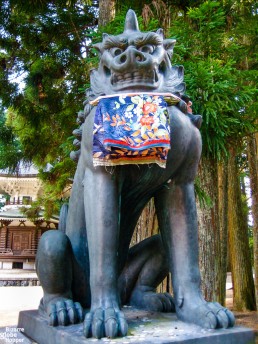 Prayers in wood in Koyasan, Japan 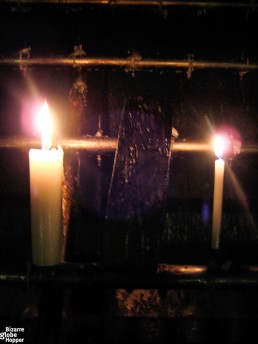 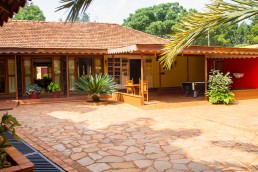 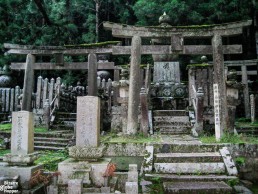 Beppu has the best natural onsens of Japan, a sex museum with a really vast collection, and a wild nightlife. Take a peek into this historical, little town.

This is perfect! The train track in the middle of the forest looks really magical. I’ve heard so many amazing things about Koyasan but I’ll definitely be going back to your posts when I plan my trip there. Thanks for sharing!

Hi, Therie! Thanks for stopping by and you’re welcome. Glad to be of help! We loved Koyasan, it has such a unique atmosphere and it was so serene and beautiful place. It’s also one of those places that I’d like to go back someday. It truly is magical! 🙂

Very nice article. Loved those beautiful images. The temple looks amazing and this would be on my bucket list. Thanks.

Hi, Marc!
Thanks so much for your comments. I’m glad you liked it! Yes, I’d definitely recommend visiting Koyasan someday, really worth it. Some of the best places in Japan.